Mergers all too frequently turn sour despite the usual goodwill of the parties involved and the lengthy preparations taken to make them work. At the bottom of this frequent disaster lies a lack of understanding of the predictable evolution of companies1 and the inherent personalities of the two or more organizations that make up the puzzle. The good news is that a smooth transition between conspiring enterprises is possible followed by growth as well as the benefits anticipated
by the protagonists in the first place. Here is how to avoid failure and ensure success.

When we understand the personalities of individuals [Reference 1] we can predict their behaviors, even more readily if they are under stress. These we define as some mix of P, A, V and F. For example, P individuals (Producers) tend to be no-nonsense people who are in a hurry. Under stress, they take charge and might grab the task they have assigned to someone else and do it themselves.

A people (Analyzers) tend to be detail-oriented people who are careful, thorough and conservative. Under stress, they often withdraw into an inaction paralysis, retreating from people and arguments, while the wheels in their brain are churning away, carefully analyzing the situation and the other people.

V workers and executives (Visionaries) tend to be outgoing, optimistic and full of ideas. Under stress, they may sulk at the realization that they and their ideas are not being recognized as unique. They may even lash out and humiliate others.

F persons (Friends) tend to be gregarious and genuinely concerned about other people. Under
stress, the Fs may worry excessively about not being accepted. Thus their decisions will be delayed as they vacillate from one position to the other trying to please all sides at once, sometimes confusing those around them.

Naturally people are not pure P or A or V or F, but some combination of all four, with, usually, a dominance in two. But any combination is possible.

If we understand the PAVF of a group we can predict the nature of their decision-making because of the relationship of PAVF to the basic decision-making elements, as follows:

Whereas, an A-dominated group will probably create decisions with great details of ‘how’ it must be done but will probably lack focus on the ‘what’, ‘why’, ‘when’ and ‘who’…… and so on.

If the group is a composite of PV, for example, it will make decisions with great attention on ‘what’ (P), and a long list of ideas generated by its focus on ‘why’ and ‘why not’ (V). But the group decisions will probably lack the details of ‘how’ (A) and ‘who’ (F).

Appendix 1 details each of the ten stages of the Evolution Pyramid that every company must
pass through over its lifetime. They are, going up the Pyramid: Wooing, Baby, Toddler and Teenager. Excellence, at the peak is the ideal operating level. On the downward slide are: Contentment, Nobility, Scapegoat, Sluggishness and Death. Each of the ten stages has a composite PAVF trait different from other stages,
along with the correspondingly different behaviors of those traits.

For example, the Baby stage is about keeping a rather helpless entity alive with careful nurturing.

Just as with a human infant, it demands constant attention and action (P) without time for the organizing details typical of A; if the baby is hungry it is fed right away without concern for the niceties of the meal – no layout of table-setting, no rearranging of the dining area; it’s all about feeding the infant as quickly as possible to arrest its scream for attention. There is no time for V, fantasies, ideas or abstracting about the college that baby
will attend but only the reality of satisfying the baby’s immediate hunger needs. F is gone too; mother stops socializing with other adults, gets immediately off the phone if baby cries as she concentrates and focuses on the needed task. The profile for a mother in the baby stage is PAVF; that is, it is mostly P.

With the enterprise at the Baby stage, the profile is also PAVF, that is, mostly P. It is also about keeping a rather helpless entity alive with careful nurturing – usually of getting enough contracts in the door and managing its delicate hunger for cash. Just as with a human infant, it demands constant attention (cash flow)
and action – sales (P) without time for the organizing details typical of A. When the Baby is hungry for money (payroll will not be met), it is fed right away without concern for the niceties of\ the P & L – no complex financial analyses, no arranging of a long list of priorities; it’s all about the immediate feeding the infant enterprise as quickly as possible to arrest its scream for attention (cash). There is little time for V, fantasies, ideas or abstracting about the great plans for the corporation’s future but only the reality of satisfying the Baby’s immediate sales or cash needs. F is gone too; the founder is demanding of others in the enterprise and is not as careful about talking or listening to associates other than barking out orders to ensure the urgent feeding task is achieved.

The sketch below shows the most typical merger scenarios, that mergers (or acquisitions) are based on mature organizations choosing to buy developing companies. Of course, any combination of buyers and sellers is possible during an acquisition; anyone can buy anyone.

Let us begin the story with the situation in which Excellence, Contentment and Nobility companies tend to buy Baby and Toddler enterprises (shown in the two boxes), which are the more common occurrences. We’ll address the other possibilities later, but to a lesser extent. 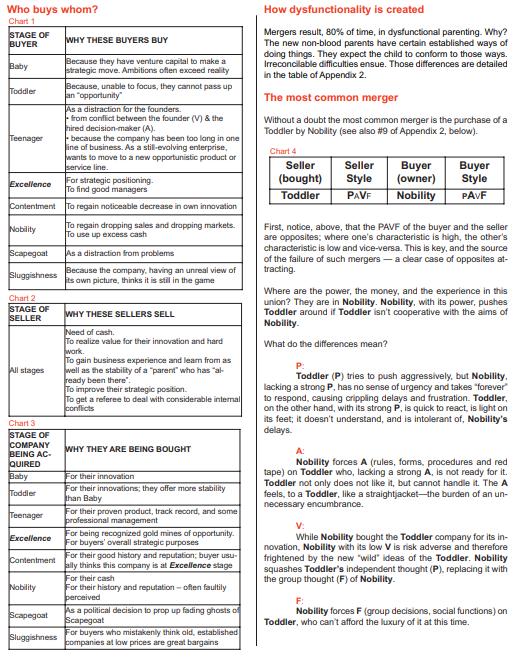 Nobility rewards and promotes those from the Toddler company who think like Nobility, namely the A’s and F’s.

The P’s and V’s within the Toddler company are not encouraged; they become disenchanted and leave or are
forced out.

The Toddler PAVF has its P and V squashed and is left with equal but small amount of PAVF. It is a compromise company; it can no longer survive as a Toddler—or anything else.

Let me state here that at the outset there must be a tolerance for those company elements that are different than your own. This is called ‘respect’. Young companies must be allowed to behave like young companies do. Just because you dress a Toddler like an adult, you cannot expect it to behave like an adult. Each enterprise at a different point on the Evolution Pyramid must be allowed to behave its own natural way—to go through its natural evolutionary and maturing processes. Each stage requires different units, different goals, different leadership, and different incentives. details how to make organizational mergers work. Chapter 13, Section 3 of Reference 1 gives a brief glimpse.

The key to making mergers work is to incorporate the acquired firm into the progressive phase of the Evolution Pyramid that suits its evolutionary stage. Then nurture the company up the Pyramid stage-by-stage to Excellence.