To be a great leader you have to learn to separate your emotions from the emotions of your employees, your suppliers and your superiors. How can you be ‘cool hand Luke’ and why should you bother anyway? Shouldn’t some people be put in their place?

We have good news and we have bad news. The good news is that we are rational creatures imbued
with emotions that save and protect us – so, no matter how over-emotional we may seem to be, it is Mother
Nature who has set us up that way. Thus, with one wave of the hand, everyone in the human race is forgiven for acting like an idiot sometimes, including you and me. The bad news is that emotions arise at the most inappropriate times, often triggered by the emotional reaction of another person. This can lead to the escalation of a worsening situation – a discussion turning to loud voices, anger or, in the extreme, blows and tears. Beyond that it can grow to vendettas, revenge and wars.

2. The Source of Emotions

A gland, called the amygdala (there are two of them), in the brain has been found to control our emotions.
This emotional processor operates at 10 to 100 times faster than the logic processor of our brain. So emotions will dominate logic simply because they kick in faster than logic. You may have experienced that when you reacted a certain way to a situation and then a few hours later, when your logic processor was functioning, you wondered why you behaved so inappropriately.

The amygdala is our protector. It has us react without taking the time to think about it – to run from the
saber-toothed tiger without analyzing the pros and cons, because if we spend too much time analyzing
we will end up in the belly of the predator. This primordial necessity carries on to this day. That is why we do things we often fail to understand. It has a memory component too. It remembers bad experiences and so, if we confront similar experiences again the amygdala prepares us to avoid them. For example if you have been frightened by a particular type of situation you will react emotionally just as the initial signs begin to appear – the shadow of hose in the peripheral vision will make the person who fears snakes react quickly. When the amygdala acts, it sets off in motion dozens of agents within the body, preparing the individual for a potential emergency, – eyes dilating, skin standing on end, kidneys at the ready, increased production of white blood cells to fight invading bacteria, etc.

When you begin a discussion, a dissertation or an explanation with a person or a group what is the real
goal? IT IS TO BRING THAT DISCUSSION TO A LOGICAL CONCLUSION SO THAT YOU CAN
MOVE FORWARD TO THE NEXT STEP. I am sorry, reader, to have capitalized this goal – but the reality is
that most people forget that goal and in the heat of the moment shift to personal issues driven by emotions with the amygdala well in control and the logic processor out somewhere in left field. Let us look at
an example.

4. Tim and Sarah Get into Hot Water

Usual Dialogue:
Tim: Sara, I don’t like the way you are getting behind in this MacDonald project.
Sara: I can’t help it with all the other work I’m getting,Tim.
Tim: Well, don’t address the other work; this one’s the priority.
Sara: That’s easy for you to say, you don’t have 60 things on the go like me.
Tim: How do you know how much I have on my plate;I’m busier than anyone else, here, including you.
Sara: Well, how come you have time for 2-hour lunches and golf every Friday?

Etc.
What do 2-hour lunches or golf have to do with the MacDonald project? Nothing. The discussion has now moved emotionally away from the topic at hand. As you know, Tim’s golf has very little to do with the MacDonald project. And where is the logical conclusion to this discussion? Nowhere to be found. Unfortunately this failure to conclude logically occurs all too often. Why? Because Tim tripped accidentally onto Sarah’s emotional territory and her amygdala took over her response mechanisms. Tim, in turn allowed his amygdala to have its say too and so the argument escalates emotionally and de-escalates information wise.

5. Recognizing that Sarah is in Hot Water

What Tim must do is not let Sarah’s problem become his problem. If he is going to save her and the situation, he must not jump into the hot water with her. The fact that Sarah has become emotional has to be recognized by Tim, who at that point should take direct action to defuse the argument. Why? Because Tim wants to be a noble human being? No, because Tim would like to arrive at a working conclusion for him and Sarah to the dilemma he sees regarding the MacDonald project. Sarah would probably like a working conclusion too.

When someone is insulting you it is very difficult to stand aside and say “My, that person is having a bad hair day” and to treat the insult you have just received as the other person’s problem because your amydala is screaming at you: “Fight or flight, Tim!” But the alternative is very scary – not resolving the issue you set out to address. If you defuse the emotion you WILL resolve the issue. If you don’t defuse the emotion, the only alternative is that you WILL NOT resolve the issue. Therefore, to get answers and the results you want, you must defuse the emotions. These thoughts can be illustrated with a sketch. 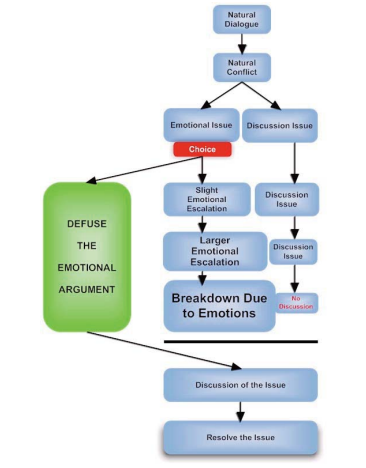 To help defuse, perhaps, you can use a few mind tricks yourself. First imagine in the scenario above that Sarah has jumped into hot water. It is now up to you to get her out of that hot water without allowing yourself to fall in. Or, perhaps you can imagine that Sarah has fallen through thin ice. It is up to you and only you to help her out, because she cannot do it alone. A third picture you can form in your mind is to view the anger and insults of the other person as if that antagonist were a two-year old child taking a wild swing at you. Would you swing back at the child as hard as you could? Not likely; you would probably recognize that the child is seriously disturbed with the situation and you would take the responsible adult role of defusing the child’s emotions because the child no longer is in control – the child’s amygdala is doing its thing. So you ignore the child’s insult and do not make it
your problem too; instead you deal with the ‘child’s’ problem to defuse it as quickly as you can.

6. Helping Sarah (and Yourself) Out of Hot Water